14 Sounds That Calm And Heal 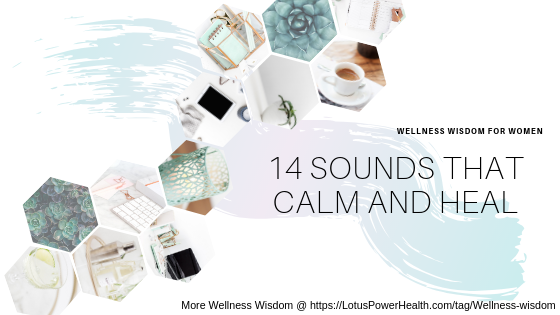 Did you know that there are sounds that can heal you, both mentally and physically?

In the sounds listed below, you will go back to every age and every culture imaginable. Allow yourself to be calmed and healed by any one of these sounds. Below is a list of 14 instruments that both calm and heal:

This is an ethereal instrument that will calm and heal your mind, especially. It was used popularly during the Middle Ages in Europe. The hammered dulcimer is a folk instrument that provides you with a calming and charming melody.

When this instrument is played correctly, the gong is a powerful therapeutic musical instrument that is believed to resolve spiritual, emotional, and physical conflict. It was used as early as 4,000 ACE. The gong is often used in meditation, yoga, and other exercises such as Chakra balancing.

This instrument is well known for its beautiful melodies. It has been used throughout the world, going back to 3000 BCE. The sweet and soft pieces it creates are therapeutic to the spirit, mind, and body, and therefore often used in modern sound healing therapies.

We often think of wind chimes as beautiful ornaments just hanging in the garden, but, in actuality, they go back to Ancient China, India, and Rome. It is commonly utilized in Feng Shiue to increase the flow of life energy (chi). Wind chimes have the capability of transmitting beautiful timbres and celestial sounds.

The pan flute is commonly made from bamboo, ivory, and wood. Pan flutes date back more than 6,000 years, and are commonly played in South American countries such as Bolivia, Ecuador, and Peru. Pan flutes are extremely common in folk music and have calming mellow melodies.

This was first developed in 2000 by two investors from Switzerland. The hang is a spherical, harmonic instrument that possesses eight different harmonic notes. Depending on how you use the hang, it resonates a sound that is similar to the singing bowl or the steel pan.

The tuning fork was first invented in 1711. The tuning fork is a unique harmonic instrument that was first designed as a method to tune instruments. Today, they are often used in healing sound therapy to help promote wellbeing, promote harmony, and to help balance the human energy field.

The didgeridoo first originated in Austria more than a thousand years ago. It is a native instrument that is usually made of wood and is painted with traditional paintings. Its beautiful sound is played by blowing through one end and is often used in music therapy to clear energy stagnation and emotional distress. It also helps in assisting mind-body healing and meditation.

This instrument originated in Africa. Kalimbas are also called thumb pianos or Mbiras. They span back many thousands of years ago. They are often made with metal keys. The sound of the Kalimba is similar to the sound of a hang or a harp. It is very easy to play. The Kalimba has been utilized in Zimbabwe to treat mental and physical illnesses.

This instrument is a drum that comes from West Africa and is made from rope, wood, and the hide of a goat. It is used commonly to produce trances (states of altered consciousness), and can calm the spirit of anxiety and stress.

This instrument is believed to have been invented by the Aztecs. Rainsticks are usually made from the inside body of dried cactuses that have objects like tiny pebbles placed inside them. As the name shows, Rainsticks make a type of sound that is similar to that of falling rain, and are used for inducing states of calm and peace.

As the name implies, this instrument was first used by the Native American Indians and is usually used in modern-day healing sound therapy. Native American flutes are generally used to promote psychological harmony, increase one’s resilience to stress, and to decrease the heart rate.

The monochord is said to have been invented by Pythagoras and is a prehistoric instrument whose vibrations are used to re-energize the mind, calm the spirit, and heal the body.

Free Checklist For You: The 9 Dimensions Of Holistic Wellness

Download the checklist to discover how you can use the 9 dimensions of holistic wellness to shape your life for greater health and wellness! The checklist will walk you through the following dimensions:

Entrepreneur, wife, mom to twin boys and two cats, and married to my soul-mate. My mission is to help you optimize your health & wellness so that you can thrive and lead a life that is more fulfilling and impactful. Tools of choice: Epigenetics. Hormones. Bio-individuality. Intolerances. Toxicity. Nutritional deficiencies. Gut health. And much more!

What do you want to check?

Topics on the blog